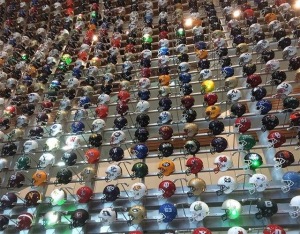 The New England Patriots have just won another Super Bowl Championship! After all one of the “American dreams” is to play football, get a college scholarship and make it in the NFL. What could be better? National recognition, big money, travel, and your picture displayed in newspapers, on TV and on the cover of Sport Illustrated.
BUT, there is another side to this story. We see the glamor, the cheering crowd, players jumping up and down upon winning and we do have appreciation for the skill and talent that players have in order to succeed in the sports world.
But, what is the rest of the story?
What is happening on the football field, in the batter’s box, in the boxing ring, on the ice or on the volleyball court? Children and teens, as well as adults, are being exposed to activities that put them at great risk.
Yes, they are at risk for broken bones and sprained ankles, but the real question is what is happening to their brains?
The National Football League reports that 1:3 former NFL players have MCI (Mild Cognitive Impairment).
Head injuries from heading and falls in soccer is the number one injury for girls.
How many boxers have developed some form of dementia, like Parkinson’s, because of the pounding their brains took while in the ring?
“Head Injuries can have long-term effects. An impact to the head may result in loss of consciousness, but there may be other symptoms such as headache, nausea, dizziness, confusion, irritability, and memory loss. Brain damage caused by concussions may result in strokes, paralysis, headaches or reduced concentration and mental clarity. A 2009 study commissioned by the National Football League reported that Alzheimer’s disease or other similar memory-related diseases appear in the league’s former players at 19 times the normal rate for men ages 30 through 49. Other studies have found that football players who suffered concussions were more likely to suffer from depression. Boxers who are exposed to repeated head trauma have a higher risk of progressive Parkinson’s disease: a well-known case is that of Muhammad Ali. In general, it is a good idea to avoid sports that expose the head to repeated impacts, such as boxing, soccer, ice hockey, and football.” Scientific Psychic
Trauma to the brain, repeatedly or from serious injuries or falls, puts us at great risk for developing Alzheimer’s disease, Parkinson’s disease or one of the other forms of dementia. As a former physical education teacher, I have a great love of sports. However, as an Alzheimer’s/Dementia Specialist I have great concern for the damage that is being done to our children and teens, as well as our adults who find they are in jeopardy because of the head injuries they are experiencing.
This is an issue that should be taken seriously. Millions of dollars are being spent each year on head injuries and lost time at school and work is increasing. Our culture encourages these types of sport activities for positive reasons, but we can’t ignore the damage that is also being done.

"Thank you for assisting us with these issues. We appreciate everything you do!"