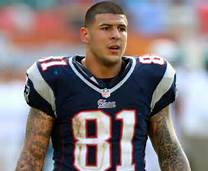 Aaron Hernandez’s autopsy has proven that when he died at age 27,  he had Stage 3 of 4 stages of CTE ! CTE is Chronic Traumatic Encephalophy. Hernandez was a player with the New England Patriot’s prior to his suicidal death.

We’ve all heard this phrase ~ CTE ~ over the past few years as the NFL has been questioned and investigated for how it is or is not protecting its players on the field. Hernandez’s autopsy results are not surprising, but they are alarming.

“A separate study published by researchers at Boston University in July found that 110 out of 111 brains of deceased former N.F.L. players had chronic traumatic encephalopathy, a degenerative brain disease.” “A growing number of scientists argue that because the human brain develops rapidly at young ages, especially between 10 and 12, children should not play tackle football until their teenage years.”  (Ken Belson,  Sept. 19, 2017, New York Times)

But it’s not just football.  The American people – kids and adults – love football, soccer, basketball, boxing, lacrosse, kick boxing, baseball, wrestling, etc., etc., etc.   We get our kicks and thrills from watching other people being tackled and knocked out on the ice from fighting.  We see our players at all levels, elementary, junior & senior high school, college and in professional sports, falling on the basketball court, tripping on the field, heading soccer balls, getting hit with baseballs or bats.  Children 6-8 years old who are playing tackle football. I stopped going to the P-Bruins Hockey games in Providence because the young children – maybe 30-40% of the crowd – were constantly yelling “FIGHT!  FIGHT!! FIGHT!”

Parents would not begin to think about letting their 8 year old behind the wheel of a car to drive on an interstate – or handle an electric saw – or do many other activities that are considered “dangerous.”  They constantly remind their high school and college kids to be careful when driving… not to take chances.

So why, WHY are they putting their children’s health and brains at risk by letting them play the type of sports that are so dangerous to their brains?

Doreen, we truly appreciate what you have done for our families. It is a much needed service [Alzheimer's / dementia support group] and we are the ones who are grateful for you.
Administrator, Heritage Hills Nursing & Rehab, Center, Smithfield, RI
4.13.17