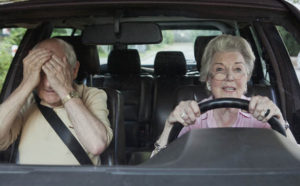 Caregivers removing car keys and their loved one’s ability to drive is a very difficult decision.  Perhaps this article by Dr. Brian Ott of Rhode Island Hospital will assist you in making a responsible decision when the time is appropriate.
***
“Driving Impairment May Be a Sign of Very Early Alzheimer’s Disease
.
Brain R. Ott, M.D. – Director of the Alzheimer’s Disease & Memory Disorders Center at Rhode Island Hospital
.
.
One of the many challenges of getting older is coping with difficulties of carrying out the tasks of daily life that were formerly completed with ease. The ability to drive safely is no exception. Declining driving skills among older adults have been linked with many age-related problems, including vision loss, troubles with walking and movement, and slower reaction times, as well as conditions such as cataracts, sleep apnea, arthritis, medication side effects, diabetes, and cognitive changes because of Alzheimer’s disease (AD).
.
According to AAA, 38 million United States drivers are 65 years or older, and many of these will experience deterioration in driving performance over time, possibly related to AD. Studies of the brains of older drivers who were killed in motor vehicle accidents have shown that many had the neuropathologic changes of AD, although they may have not been diagnosed with the disease while they were alive. These findings motivated a recent collaboration between noted researchers at Washington University and those at Rhode Island Hospital/Brown University to look closely at the possibility that AD can lead to significant driving impairments long before it can be diagnosed by a physician.
.
Advances in technology have led to new research criteria for the “preclinical” stage of AD preceding mild cognitive impairment (MCI) or “prodromal” AD, when amyloid plaques can be seen in special brain scans, before any noticeable symptoms of cognitive or functional impairments can be recognized by the patient or others. These criteria are influencing the development of greater knowledge about the very earliest signs and symptoms of AD, as well as driving the search for sensitive clinical biomarkers of AD.
.
Abnormal levels of AD biomarkers detected in brain scans of cognitively normal older individuals who had undergone amyloid positron emission tomography(PET) were recently reported to predict scores on a standardized road test, raising concern that amyloid deposition during the preclinical phase of AD could indicate an increased risk for dangerous driving. Therefore, we studied whether the presence of increased amyloid seen in brain PET scans places an older person at risk for unsafe driving, as measured by tallying the number of actual traffic violations or motor vehicle accidents, and found that this was the case in the preclinical stage of the disease.
.
At the 2017 Alzheimer’s Association International Conference in London, we reported the results of a long-term study of a group of older drivers, some with preclinical AD, that were followed at Washington University. At the beginning of the study, 121 participants, aged 65 or older were cognitively normal and drove at least once weekly. Biomarkers of AD were obtained two ways; 1) with amyloid PET brain scans, and 2) the amount of amyloid and tau proteins measured in the participant’s spinal fluid. Participants completed a 60-minute, in-traffic (12 mile), road test along a pre- set route annually, and were followed for up to 4 years. As predicted, increased levels of spinal fluid and amyloid PET biomarkers was associated with faster development of driving impairment, as indicated by a Marginal or Fail rating on the annual road test.
.
The data from our research suggests that driving is an important and highly complex daily living function that provides a sensitive indicator of declining cognition and may be an important safety consideration for older people who are in the preclinical stage of AD.
.
The Driving Study is Still Enrolling!
.
The Alzheimer’s Disease and Memory Disorders Center at Rhode Island Hospital is currently seeking volunteers to participate in a one-year study of a video feedback intervention to improve the safety of older drivers with mild cognitive impairment or early Alzheimer’s disease. Interested individuals should contact Kayla Hersey at        [401-] 444-7691.”
.
Source:  “Connections”, Fall, 2017

"Thank you for all you continue to do for so many.  I consider you a valuable mentor and educator that I'm grateful to have met through caregiving."