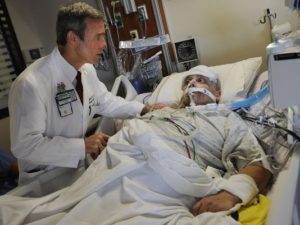 Are you about to have surgery? Or have you recently had surgery and don’t feel like you are back to “normal” yet?
.
“26% of surgery patients leave Intensive Care Units with new, Alzheimer’s-like symptoms.”
.
“Patients treated in intensive care units across the globe enter with no evidence of cognitive impairment but oftentimes leave with deficits similar to those seen in patients with traumatic brain injury (TBI) or mild Alzheimer’s disease (AD). Researchers were surprised to further reveal that symptoms tend to persist for a year or more. These troubling statistics are according to a Vanderbilt study published in the world-renowned New England Journal of Medicine.”
.
Vanderbilt University Medical Center has just released information on the impact anesthesia has on cognitive ability. They are promoting the four steps below that patients can take, before leaving ICU or the hospital in order to improve brain function.
.

Several years ago my husband had 7 anesthesia’s in a five month period for a series of medical issues that they had great difficulty identifying… they never were successful.  Having had that amount of anesthesia in his system, left him with MCI – mild cognitive impairment. He could function normally, except when it came to his cell phone and computer.  He was never able to load information into his calendar on his phone accurately or remember the specifics of dates and times, even though I had told him this information 3-4 times at one sitting.  He was forever pulling up the wrong year or putting times in PM instead of AM.  Consequently he missed doctor’s appointments and other events that he should have been aware of in his calendar.  I also started keeping a double calendar – his and mine –  so he would not miss his appointments. He could not figure out how to open his computer and get to his files.  Once he was there with my help, he was fine and would spend hours writing.  He was able to function in every other way, but our family saw a dramatic difference in his ability to work with his cell phone and computer following his hospitalizations.

Anesthesia is a good and necessary thing for the medical community, but as with everything we put into our bodies, there can be side effects. If you have upcoming surgery, talk with your doctors about the above protocols to improve your brain response after hospitalization.

"Just had my visit with my friend ... who has dementia.  It was wonderful. The tips you gave me were right on. We talked and talked. And while his wife was there. He did participate. I was lucky enough to find a replica of his favorite car and it was a big conversation starter. Thanks again. It was a positive experience all around."
S.C. - College - Rhode Island - July 1, 2021